Traveling to NYC from Lancaster is easy when you travel with OurBus. Bus trips from Lancaster, PA are on a premium bus service at an affordable price for any budget. Every bus from Lancaster PA to NYC is a modern charter-style bus that includes WiFi, reclining seats, power outlets, a sanitized bathroom, and a complimentary bottle of water.

Trips through OurBus have several enhanced safety measures for staff and customers. Our mission, to make the feeling of traveling just as good as the feeling of arriving, has never been more important than it is now. To deliver that experience, we know that we have to listen to our customers, provide flexibility and prioritize safety throughout your journey. Contactless boarding with OurBus is now easier than ever with the use of our mobile apps available on iOS or Android.

OurBus only works with the best bus companies to provide a high level of service which has made us a top travel option for residents, tourists, and students. If you are looking to travel as a group, check out the bus tours to NYC from Lancaster PA that OurBus offers. Simply submit your request on our Charters page and we’ll find the best deal for your group.

When visiting New York City, there are a few must dos that everyone has on their checklist. Most notable attractions include scaling the soaring Empire State Building for incredible views of the city, taking in the glitz and glamour of the hustle and bustle of Times Square and of course attending an extravagant Broadway show while in the city.  While you can have the pleasure of attending many of the more popular  Broadway shows across America, there’s nothing quite like experiencing Broadway in the heart of NYC, the birthplace of America’s musical theater. If you’re new to Broadway, the experience can be both exciting and intimidating, especially when it comes to choosing which show to attend. Below we have compiled a short list of some of the most popular Broadway shows. Check show websites to see when performances are scheduled.

Hamilton is the story of the Founding Father, Alexander Hamilton, and how he made his mark on America following the Revolutionary War. Composer-lyricist-broadway star Lin-Manuel Miranda gives the audience a refreshing take on Hamilton’s life with a smooth blend of hip-hop and musical storytelling mixes with an exciting, immigrant slant. The diverse cast takes well known American history and in turn remixes it into something new but familiar.

Harry Potter and the Cursed Child

The world of Harry Potter has come to Broadway with a marvelous dose of theatrical magic woven into each moment. Harry Potter and the Cursed Child is set two decades after the final chapters of the Harry Potter heptalogy. Despite the battle being won all those years ago, darkness sometimes comes from unexpected places. This Broadway show will leave you awestruck, spellbound and deeply satisfied by the time you walk out of the theatre as you once again plunge yourself into the World of Harry Potter.

The Lion King is an entertaining stage adaptation of the beloved 1994 Disney film. It is a story of a young lion prince living in the beautiful African wildlands with his pride. When tragedy strikes, Simba is forced to leave his home and flee his wicked Uncle Scar, who murdered his father in a successful coup. Simba soon finds two hilarious companions that help start life anew. But after several years, Simba is drawn back to the place of his birth and must defeat his Uncle Scar to ultimately take his destiny as King.

New York’s Broadway offers so much more than just the musical theatre and the awe inspiring Times Square. Many of NYC’s most famous department stores and shopping boutiques occupy real estate on Broadway, which spans over 13 miles across the length of Manhattan. When exploring Broadway’s unique shops and markets, the experience can be like going on an adventure in search of treasure scattered throughout the different storefronts.

Governors Island and summer in New York are a match made in heaven. The 172-acre island, located across the water from Brooklyn, is a former military base used during both the Revolutionary War and War of 1812. Today Governor’s Island is used as a seasonal recreation area where visitors from NYC can come and enjoy the outdoors. Several of the more popular events include Governor’s Island Camping, picnicking with friends and family, touring the island via the amazing bike paths, and taking a quick power nap in the summer sun while laying in your hammock while visiting Governors Island. Traveling here can only be done by taking the Governor’s Island Ferry, so be sure to plan ahead if you can manage to fit it into your schedule.

The Grand Central Terminal is a New York landmark that is part of the city’s soul. This historic station was opened to the public on February 2, 1913, and has garnered a rich history throughout the years as residents and visitors to NYC alike travel across the city from its hub in Midtown Manhattan. In addition to being the home of the MTA Metro-North Railroad and a subway station serving multiple lines, Grand Central Station in New York is now a retail and dining destination for New Yorkers that love food and shopping. With 750,000 visitors per day, Grand Central Station in NYC is among the top destinations in New York City, only second to the iconic Times Square. Exploring the labyrinth of passages throughout this architectural marvel not only allows you experience living history, but it also allows you to travel just about anywhere in the city from one convenient location!

The High Line NYC is one of New York’s most popular and innovative parks that you can visit in the city. New York City’s elevated park was once a rail track that ran through Manhattan’s Westside as it carried both passenger and freight trains above the busy borough that lay below. The railway slowly began to be used less and less as commercial trucking provided an alternative to transporting commercial freight by train. By the 1980s, the High Line New York had turned into an unused piece of the railway that slowly became an eyesore for the city.

The structure was scheduled to be demolished after decades of disuse in 1999 but the demolition was stopped by the newly established Friends of The High Line. The organization sought to revitalize the old railroad by transforming it into something that the public could use. The idea for an outdoor park came from a worldwide contest that asked participants to submit ideas for the 1.5 mile-long stretch of track. The transformation began in 2006 and was opened to the public in 2009 with additional sections added as time has gone on. It goes without saying that when the sun is shining, there’s nothing quite like strolling along the floating promenade that is High Line Park.

Looking for more places to explore in NYC? Check out our New York City Guide! 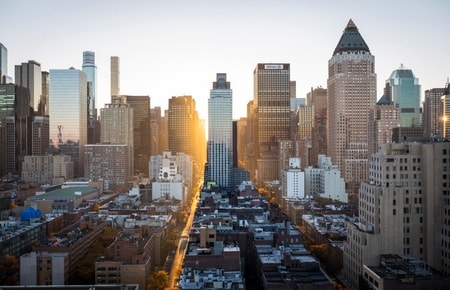 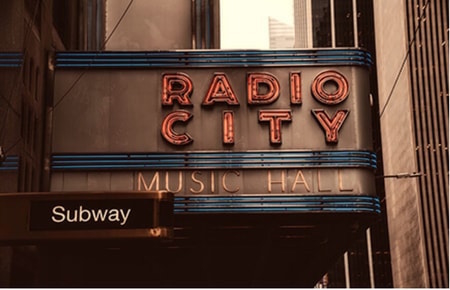 Bus Tickets From Lancaster to NYC

The Lancaster to New York bus departs from the Holiday Inn, located at 26 E Chestnut Street, Lancaster. This bus stop is a short walk away from the Lancaster bus station, Queen Street Station, located on 225 N Queen St, Lancaster. TheOurBus’s arrival destination in NYC is located at Park Avenue South between 26th and 27th.  New York City bus trips from Lancaster PA are smooth sailing when you choose OurBus. Traveling by bus  is a great alternative to taking the train or traveling by car as you make your way to NYC.

Prior to the bus’s arrival and even during your journey, you can track the precise location and time of arrival for your specific bus. Simply click on the link that is included in your confirmation ticket email or in the OurBus app which you can find on iOS and Android.

How to get to NYC from Lancaster PA?

You can travel to NYC from Lancaster, PA via bus, car, or train.

How far is Lancaster from New York?

The distance is 166 miles between Lancaster and New York.

How long does the bus take from Lancaster to NYC?

The bus journey from Lancaster to NY takes approximately 3 hours and 30 minutes. However, this may change due to weather and traffic conditions. OurBus trips typically leave on time and normal traffic conditions are factored into our arrival times.

When does the bus leave from Lancaster to NYC?

The departure times and ETA are available on OurBus.com or the OurBus app once you search for your origin and destination.

What is the cheapest way to get from Lancaster to New York?

The cheapest way to get from Lancaster to New York is walking. If you don’t feel like taking the 50 hour stroll, OurBus has affordable tickets starting as low as $40*.

What is the Cheapest Bus Fare from Lancaster PA to New York?

OurBus offers tickets at a great price when you purchase in advance of your travel date. We also offer even lower rates on certain days or weeks when we have less travelers, so be sure to try and plan as far in advance as you can!

Does OurBus Offer a Direct Bus Between Lancaster and New York?

OurBus offers the most direct service, which has only a few intermediate stops in Pennsylvania on the trip between Lancaster and NYC.

I would like to alter my ticket from Lancaster to NYC to an earlier or later time or date. What do I do with my original ticket?

If your scheduled departure is more than 30 minutes away, you can simply cancel your original ticket on our website/app and transfer the money as stored credit to OurBus Wallet. This credit will reflect in your Wallet immediately and you can use this to book another ticket on our website or app. You’ll only need to pay the difference in fare, if any, for a new reservation. That’s The OurBus Assurance.

How do I get a chartered bus rental near me in Lancaster, PA or rent a bus in New York, NY?

OurBus taps into a network of high-quality bus owners and operators to be able to find your coach for hire rental in Lancaster County Pennsylvania or charter bus rental in the NY area at the lowest price. To find out more about OurBus charter hire, see our Charter information and Submit a Request.