No buses available during the selected dates.

You can book our next available dates!
Starting .

Please search for future dates to see service between these stops.

Travel by premium bus service from Ithaca, NY to New York, NY. Every OurBus from NYC is a modern charter-style bus with WiFi, power outlets, reclining seats, a sanitized restroom and a free bottle of water. We work with only premium bus companies to provide the OurBus level of service that has made us a top travel option for NYC residents, tourists, and students. On this OurBus route, you'll leave by bus to NYC from Ithaca, New York. This bus departs from 130 E Seneca Street (Downtown Ithaca) and is an easily accessible stop from anywhere in the area by car or TCAT bus.

An OurBus from Ithaca to New York City is a great alternative to driving, taking the train or any other means of transportation you may be considering. The beauty of a bus trip like this is you simply get on in Downtown Ithaca and get off at the bus stop located in midtown Manhattan at either Park Avenue South and 26th street or the Port Authority Bus Terminal.

New York City. It?s called the city that never sleeps and it lives up to the name if you want to keep yourself entertained for an entire day and night. NYC is as versatile as a city as they come. It can be quiet if you visit one of its many parks, busy if you find yourself in Times Square, a gastronomical delight if you dine in one of its many restaurants, an artist?s paradise in any of its museums. It has hiking trails, zoos, observational decks, large green spaces, and of course, a beautiful skyline. You could go up the Empire State Building, visit the Statue of Liberty, spend the day at Central Park, watch a musical on Broadway, walk the Brooklyn Bridge, hang out at the MoMA, or pick from a variety of things the city has on offer.

Walking the streets of NYC, you feel like a true star - whether it's a performance at Radio City or attending one of the amazing Broadway shows, NYC is something you can't replicate anywhere else in the world. When you arrive, there's a wide array of hotels and restaurants to satisfy your needs, which will make you feel like you never want to leave.

Students of Cornell University and residents of the Finger Lakes region use this bus on a regular basis as a means to get away for the weekend and have some fun with friends and family in New York City and head home during college breaks. If it?s your first time in the city there are a multitude of places to see around the city and many experiences to be had.

If you?re a student of international politics then a visit to the United Nations should be one of the things to definitely check off your list. The United Nations is headquartered in New York City, New York 10017 on 1st Avenue between 42nd and 48th Streets. The complex has served as the official HQ of the UN since it was built in 1952 by architectural firm Harrison and Abramovitz. It is located in the Turtle Bay neighborhood of Manhattan and covers 18 acres of land that overlooks the East River.

If you are interested in admiring what mother nature has to offer, we suggest visiting the New York Botanical Garden, located in Queens, New York. The Queens Botanical Garden (QBG) is a botanical garden located on Main Street in Flushing, Queens. The Garden is a 39-acre site that features flowers, bee, vegetable, wedding, and perennial gardens in addition to an arboretum, an art gallery, and a Visitor and Admin Building, built to LEED-certified standards. The Queens Botanical Garden was created as part of 1939 New York World?s Fair and was eventually moved to its current location in 1964 in preparation for that year?s New York World?s Fair. Since moving, the Botanical Garden has continued to grow and expand by offering education to local residents and developing a master plan to renovate the garden in 2001. This has led to the Queens Botanical Garden becoming a place worth visiting for anyone that loves plant life and seeing an exquisitely tended garden in the heart of Queens borough New York.

As you travel through the five boroughs of New York, be sure to make a stop in the Bronx and visit the Zoo. The Bronx Zoo is located within Bronx Park in the Bronx, New York City. The Bronx Zoo is one of the largest zoos in the United States and the biggest zoo located within a city in the USA. The Zoo is well known for its impressive diversity of animals and its incredible, award-winning exhibits throughout. The Bronx Zoo opened to the public in 1899 and has created a unique view of the natural world for residents and visitors to New York City. It is also a center for conservation efforts that span across the entire globe. You can visit the (Sea) Lions, (Mountain) Tigers and (Big Grizzly) Bears, oh my! There are more than 700 species of animals, who educate and inspire animal lovers of all ages. The Bronx Zoo?s goal is to connect visitors with wildlife to encourage them to support the conservation work that goes on behind the scenes at the Wildlife Conservation Society?s flagship park.

With all of these sites to visit when you visit New York City, we look forward to you booking a ride with OurBus and we can?t wait to have you on board! 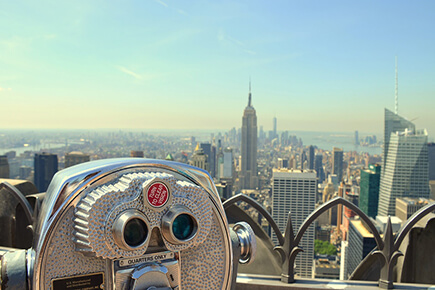 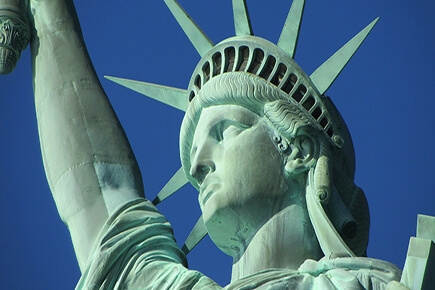 When travelling by bus from Ithaca to NYC, you will depart from 130 E. Seneca Street, Ithaca, NY E. Seneca Street in front of Starbucks This is just adjacent to The Commons area.

Prior to the bus arrival and even during your journey, you can track the precise location and time of arrival for your specific bus. Simply click on the link that is included in your confirmation ticket email or go to Track Bus on the OurBus app.

How long does the bus take from Ithaca to NYC?

The bus journey from Ithaca to NYC takes approximately 5 hours (4 hours with our express service). However, this may change due to weather and traffic conditions.

What is the distance between Ithaca and NYC?

The distance between Ithaca and NYC is 223 miles.

When does the bus leave from Ithaca to NYC?

What's the best way to get from Ithaca, NY (Cornell) to NYC?

If you are looking for a combination of speed, comfort, reliability and affordability, the best way to travel from Cornell, or Ithaca in general to NYC is via an OurBus. Cornell Campuses are about a 4-minute drive from the OurBus stop in downtown Ithaca. To get from Cornell you can take the bus or walk the 20 minutes like many other students end up doing because of the close proximity to campus. All of these ways make it easy to get to downtown Ithaca for any student that lives on the Cornell campuses and wants to get to New York City.

Coming soon, we will be launching OurBus Door<To>Door, which will allow any OurBus passenger to schedule a shared taxi to the East Seneca Street OurBus stop from any location within 5 miles. This transportation innovation will make the ride from Cornell to NYC even easier and cheaper!

How do most people travel between the East Coast and Cornell?

Cornell is connected by air and ground transportation to the East Coast. Ithaca Tompkins International Airport has flights to many East Coast destinations.

However, the majority of people travel by ground transportation.

Other than personal car, bus travel is the most used form of transportation and OurBus has been providing increasing service for this route since 2017. We?re proud to have the highest online customer ratings with thousands of reviews across TrustPilot and Google, a reflection of our emphasis on caring about passengers every step of the journey.

I would like to alter my ticket from Ithaca to NYC to an earlier or later time or date. What do I do with my original ticket?

If your scheduled departure is more than 30 minutes away, you can simply cancel your original ticket on our website/app and transfer the money as stored credit to OurBus Wallet. This credit will reflect in your Wallet immediately and you can use this to book another ticket on our website/app. You?ll need to pay the difference in fare, if any, for a new reservation. Within 30 minutes of departure, please contact our customer service team for assistance.

Pay $15 less for every ride with Super Saver Pass

Well done! Your SuperSaverXX Pass has been successfully added!
Proceed to checkout Remove

You had used abcourbus@gmail.com to login with Facebook earlier. Try login with same method

You had used abcourbus@gmail.com to login with Google earlier. Try login with same method

abcourbus@gmail.com
is registered with us.
Create password to continue

Enter your email to finish signing up.