Traveling from New York City to Baltimore is made simple with OurBus. OurBus provides direct routes between NYC and Baltimore at an affordable price. Every OurBus from New York to Baltimore bus is a modern charter-style bus outfitted with reclinable seats, individual power outlets, free WiFi, a sanitized bathroom and a free bottle of water. OurBus works with premium bus companies to ensure a stress-free trip when taking a bus to Baltimore from NYC.

OurBus ticks can be easily purchased on our website or via the OurBus app that is available on iOS and Android. You can find many other routes offered by OurBus on our website and app in addition to the bus service from NYC to Baltimore, MD. The NYC to Baltimore route is popular among students of Johns Hopkins University, business travelers and tourists that are interested in exploring Baltimore.

Once you arrive in Baltimore, we suggest adding a few sights to your itinerary while you are in town. One of the most esteemed places for travelers to visit is John Hopkins University. John Hopkins University opened in 1876 and was named after Maryland businessman, abolitionist, and philanthropist John Hopkins. Hopkins believed in the improvement of public health and education in the Baltimore area and beyond. John Hopkins University strives to be a destination for excellence among the ambitious scholars that are enrolled at the University. It is also a world-class leader in medical research and is known as a place that continues to revolutionize higher education in the United States as it continues to bring its knowledge and discoveries to the world.

Another historical site worth visiting while in Baltimore is Fort McHenry. Fort McHenry is the site of a historical battle between the United States versus Britain during the War of 1812. The British Navy launched a naval assault from the Chesapeake Bay on September 13, 1814 in an attempt to overrun the city of Baltimore. The soldiers at Fort McHenry were able to repel the British ships and ultimately thwart the attack in two days during the Battle for Fort Mchenry. The valiant defense of Fort Mchenry in turn inspired Francis Scott Key, a local lawyer and amateur poet,  to compose what would eventually be called America?s National Anthem, The Star-Spangled Banner. Fort Mchenry National Monument and Historic Shrine is the only area in the National Park System to have the designation of both a national monument and historic shrine, showing us how significant this location is to the history of the United States.

As you can read, Baltimore has much to offer to anyone that visits the city. Baltimore has numerous historical sites and fun activities for anyone to enjoy. From John Hopkins University to the National Aquarium in Baltimore, to the Battle at Fort McHenry, there are many interesting places to explore around the city. So what?s holding back? Buy your cheap bus tickets from New York to Baltimore today! 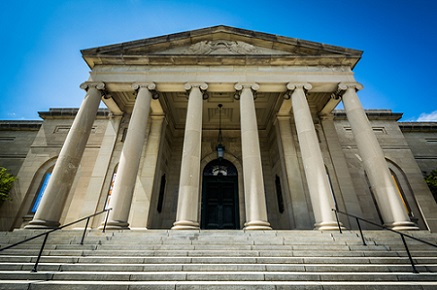 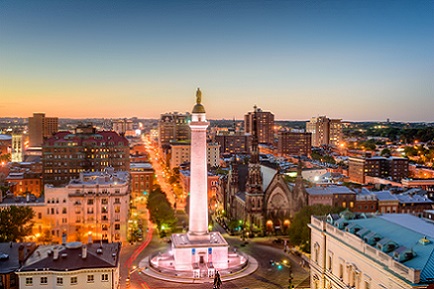 Pick Up And Drop Off Locations

When traveling by bus from NYC to Baltimore, you will depart from 51 Madison Avenue. Madison Avenue between 26th and 27th Streets.

The bus stop in Baltimore is located at 8200 Perry Hall Blvd, Baltimore, MD White Marsh Mall, in the  Boscovs Parking Lot. The bus pickup area is located in the center of the lot adjacent to a landscaped area with trees.

The precise location and time of departure of individual trips will be available in the Route details for the trip and on your boarding pass once you make your reservation.

How far is Baltimore from NYC?

It is approximately 190 miles from NYC to Baltimore.

How long is the bus ride from NYC to Baltimore?

The bus journey from NYC to Baltimore takes 3 hours. However, this may change due to weather and traffic conditions.

What is the cheapest way to get from New York to Baltimore?

The most affordable way to travel from NYC  to Baltimore, Maryland is by bus. OurBus tickets start as low as $10*.

How much is a bus ticket from NYC to Baltimore?

OurBus tickets start as cheap as $10*.

Are there restrooms in OurBus?

Yes, every OurBus has a clean, sanitized bathroom.

What is the OurBus stop in NYC?

The OurBus boarding stop in New York to Baltimore is located on Madison Avenue between 26th and 27th Streets.

When does the bus depart from NYC to Baltimore?

How do I cancel my ticket for NYC to Baltimore?

You can cancel your ticket for a full refund up to 24 hours before departure by logging into your account at OurBus.com or on the OurBus app. If you booked directly on the OurBus website or app, you can receive cash or OurBus Wallet credit. Bookings from Online Travel Agency third-party sites are eligible for Wallet Credit. For any issues, please contact our customer service team.

I would like to alter my ticket from NYC to Baltimore to an earlier or later date. What do I do with my original ticket?

If your scheduled departure is more than 30 minutes away, you can simply cancel your original ticket on our website/app and transfer the money as stored credit to OurBus Wallet. This credit will reflect in your Wallet immediately and you can use this to book another ticket on our website/app. You’ll need to pay the difference in fare, if any, for a new reservation. Within 30 minutes of departure, please contact our customer service team for assistance.

How do I get a chartered bus rental near me in New York, NY or Baltimore, MD?

OurBus taps into a network of high-quality bus owners and operators to be able to find you a charter bus rental in New York or charter service in Maryland at the lowest price. To find out more about OurBus charter hire, see our Charter information and Submit a Request.