Travel by motorcoach service from Binghamton, NY to New York, NY. Every OurBus from Binghamton is a modern charter-style bus with power outlets, WiFi, reclining seats, a free bottle of water and a sanitized bathroom. OurBus works with only premium bus companies to provide high-quality service that only OurBus can produce.

An OurBus from Binghamton to New York City is a great alternative to driving, taking the train or any other means of transportation you may be considering. The beauty of a bus trip like this is you simply get on in downtown Binghamton and get off at the bus stop located in midtown Manhattan at either Park Avenue South and 26th street or the Port Authority Bus Terminal.

If you have never been to New York City, there are a few places that should be on your list of places to visit before you leave. One attraction that is worth the effort of visiting is the Statue of Liberty. Lady Liberty is among New York City?s most familiar and notable landmarks. Some visitors miss out on the Statue of Liberty tour because of the planning that it takes to visit the park. This amazing site is easy to work into your NYC visit with a bit of planning for the Statue of Liberty ferry and the tickets that can be found with a simple google search. We highly recommend visiting if you can squeeze it into your schedule, Lady Liberty is even more impressive in person than you can imagine!

The Metropolitan Museum of Art is another place that is worth including in your itinerary on your visit to New York City. The Metropolitan Museum of Art?s collection includes over five thousand years of art from around the world for visitors to experience and enjoy. Since its founding in 1870, The Met Museum has strived to be more than a collection of rare and priceless artwork. The staff and visitors to The Met breathe life into the Museum?s galleries, exhibits, and events each day and reveal unexpected connections and uncover new ideas as they interpret, learn and understand the artwork that spans time and cultures from around the world. A visit to this iconic museum is a priceless experience for anyone that enjoys art and culture.

The National September 11th Memorial (9/11 Memorial Museum) is a memorial and museum in New York City dedicated to honoring those lost during the September 11th, 2001 terrorist attacks and the 1993 World Trade Center bombing. The memorial is located at the World Trade Center site, which is the former location of the Twin Towers that were destroyed during the attacks on September 11th. The 9/11 Memorial Museum is open to the public and invites visitors to learn about the history of the September 11th attacks and the 1993 World Trade Center bombing. The museum?s impressive blending of architecture, history, and archaeology creates a lasting impression with the story of the attacks, the aftermath of each event and the people who lived through these events. The memorial is worth visiting to understand the victims of the attacks and heroes that responded to both attacks, as you learn and explore all of the sacrifices that were made in the days, weeks, months and years following the aftermath. The outdoor water exhibit is particularly breathtaking.

As you can see, New York City has a vast number of activities that range in size and scope depending on what you may be interested in. There are so many possibilities when it comes to how you can spend your day in New York City, every visit will have its own unique twist. When you?re planning your next visit to New York City, remember OurBus is one of the easiest ways to travel from Binghamton to NYC and makes it a simple choice when planning your trip. 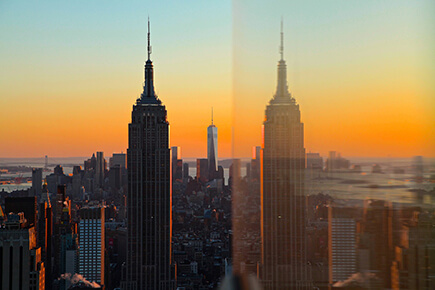 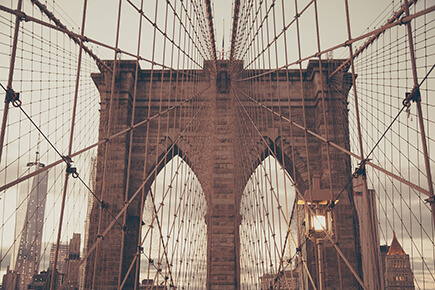 The Binghamton to New York City bus pickup location is an easy trip from the campus of Binghamton University by car or the OCCT Downtown Express route.

Prior to the bus?s arrival and even during your journey, you can track the precise location and time of arrival for your specific bus. Simply click on the link that is included in your confirmation ticket email or view it on the OurBus app.

How long does the bus take from Binghamton, NY to NYC?

The bus journey from Binghamton to New York City, NY takes approximately 3 hours and 20 minutes. However, this may change due to weather and traffic conditions.

What is the distance between Binghamton NY and New York City?

The distance between Binghamton and NYC is 175 miles.

When does the bus leave from Binghamton to NYC?

What amenities are included on a bus from Binghamton to NYC?

What is the best way to get from Binghamton to NYC?

There are only two ways to travel between Binghamton to NYC: via car or bus. There are no direct flights or train rides that run between the two cities, so traveling by road is the only option. OurBus is an excellent choice for this trip so you can relax for the 3 ˝ hour drive while we get you safely to New York City.

What is the busiest time to travel by bus from Binghamton to New York?

The busiest time for travel by bus from Binghamton to New York is usually on Saturday. If you plan to travel on Saturday, we recommend that you book your tickets in advance to ensure that you have your ticket for that day and get the cheapest bus ticket price available. Alternatively, Monday and Tuesday tend to be the least busy days during the week and the buses leaving tend to be less crowded.

I would like to alter my ticket from Binghamton to NYC to an earlier or later time or date. What do I do with my original ticket?

How do I get a chartered bus rental near me in Binghamton?

OurBus taps into a network of high-quality bus owners and operators to be able to find you a charter bus rental in Binghamton and the surrounding Broome County. To find out more about OurBus charter hire, see our Charter information and Submit a Request.