Looking to travel from Columbia, Maryland to New York City by bus? Then look no further, OurBus has you covered! Through OurBus you can get high-quality bus service from Columbia, MD to New York at an affordable price for any budget. Every bus from Howard County to NYC is a modern charter-style bus with individual power outlets, free WiFi, an onboard bathroom, adjustable seats, available sanitizer and a complimentary bottle of water. OurBus only works with the best bus companies to provide a high level of service.

OurBus is a favorite amongst travelers from Howard County and an excellent way to get you to NYC quickly and safely. It?s no wonder this is one of our most popular routes with college students, business travelers and families wanting to travel without worry to the Big Apple.

Our mission, to make the feeling of traveling just as good as the feeling of arriving, has never been more important than it is now. Contactless boarding with OurBus is now easier than ever with the use of our mobile app available on iOS or Android. Other changes to ensure the safe and healthy of everyone include masks being required for all passengers and staff, available hand sanitizer at the front of the bus and in the restroom, 50% seating capacity on all trips, disinfecting buses after every trip and OurBus?s commitment to participating and assisting health officials with contract tracing should someone traveling contract COVID-19.

Whether you may be thinking about driving, catching a train, or perhaps some other means of travel, OurBus makes it an easy decision when choosing to travel by bus from Columbia to New York. Travelers will board the Columbia, MD to NYC bus at the bus stop located at Waverly Avenue, between Walnut Place and University Ave. The bus arrives in New York City at Park Avenue South between 26th and 27th Street.

If you're interested in visiting a historic site while visiting New York, look no further than the Hamilton Grange National Memorial. This historical site was once the home of one of America?s founding fathers, Alexander Hamilton. Born and raised in the West Indies during the mid 18th century, Hamilton came to New York in 1772 to study at King?s College, known now as Columbia University.  Alexander Hamilton served the Continental Army as an officer and rose through the ranks to become one of George Washington?s most trusted aides during the American Revolutionary War. After the war, Hamilton played a key role in shaping America through his co-writing of the Federalist Papers that helped gain support for the Constitution. He served as the first secretary of the Treasury and was the architect for many of the financial institutions we regularly rely on today. Hamilton commissioned John McComb Jr. to design a Federal Style country home on the sprawling 32-acre estate where ?The Grange? was built in upper Manhattan. The home was completed in 1802 and gained its name from Alexander Hamilton?s ancestral home in Scotland. Hamilton only lived in this home for two years before being killed in the infamous duel in which he lost his life to Vice President Aaron Burr. Hamilton?s adventurous life has also been brought to the Broadway Stage in one of the most beloved musicals in years with Hamilton. The Broadway Show is a rich depiction of Alexander Hamilton?s life with the musical twist to keep the audience entranced. The Broadway showing of Hamilton is very popular, so if you wish to see it in person we suggest planning well in advance!

If you're a foodie with a sweet tooth and love of dairy, we definitely urge you to check out the Ample Hills Creamery in Brooklyn. This 15,000 square foot ice cream factory is the largest of its kind in New York City and produces up to 500,000 gallons of deliciousness every day! Ample Hills Brooklyn also offers self-guided tours that allow guests to learn about how they develop new ice cream flavors and learn about the creation of fan favorites like Ooey Gooey Butter Cake, Peppermint Patty and the location exclusive flavor, The Hook. This particular flavor was recently created to pay homage to the Dutch settlers that lived in Red Hook, Brooklyn, and features ?burnt sugar ice cream, house-made stroopwafels, and chunks of salted fudge.? Yum!

Looking for more places to explore in NYC? Check out our comprehensive New York City Guide! 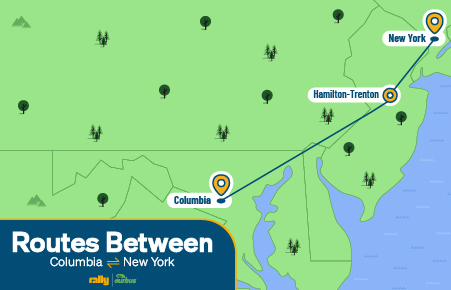 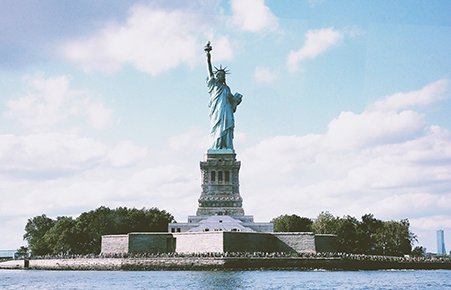 PICK UP AND DROP OFF LOCATIONS

When traveling by bus from Columbia to NYC, you will depart from Broken Land Park & Ride, East Lot.

The bus stop at NYC is located in midtown Manhattan. Please check our website and your ticket for exact stop details.

Prior to the bus?s arrival and even during your journey, you can track the precise location and time of arrival for your specific bus. Simply click on the link that is included in your confirmation ticket email.

The bus journey from Columbia to NYC takes approximately 4 hours. However, this may change due to weather and traffic conditions.

What is the fastest way to get from Columbia to New York?

OurBus is one of the fastest ways to get from Columbia to New York, with trips averaging between 4 to 4 ˝ hours on the road.

How do I travel from Columbia to New York without a car?

OurBus can provide a budget-friendly form of transportation to get you from Columbia, Maryland to New York, NY.

What is the distance between Columbia and NYC?

The distance between Columbia and NYC is 208 miles.

Is there a direct bus between Columbia and New York?

While there is no direct bus service between Columbia and New York, OurBus trips has only a few quick stops along the way.

What is the cheapest way to get from Columbia to New York?

OurBus is one of the cheapest ways to get to New York from Columbia, with affordable bus tickets being offered daily.

When does the bus leave from Columbia to NYC?

Where do I catch the Columbia to New York bus from?

The bus stop is located in Columbia at the Broken Land Park & Ride, East Lot.

Where does the Columbia to New York bus arrive?

The bus arrives in Midtown at E 26th and Park Ave S. Penn Station is close to this stop and can be used to get you to your next destination. Penn Station can be reached by walking up Park Ave to 32nd (past Capital One Bank) and then walking a few blocks until you reach the Penn Station entrance located on 7th Ave and 32nd Street.

I would like to alter my ticket from Columbia to NYC to an earlier or later time or date. What do I do with my original ticket?

All tickets purchased on the OurBus website or app are covered by The OurBus Assurance, the industry?s most flexible trip change policy. If your scheduled departure is more than 30 minutes away, you can simply cancel your original ticket on our website/app and transfer the money as stored credit to OurBus Wallet. This credit will reflect in your Wallet immediately and you can use this to book another ticket on our website/app. You?ll need to pay the difference in fare, if any, for a new reservation.

How do I get a chartered bus rental near me in Howard County, Maryland or rent a bus in New York, NY?

OurBus taps into a network of high-quality bus owners and operators to be able to find your coach for hire rental in Columbia, Maryland or charter bus rental in the NY area at the lowest price. To find out more about OurBus charter hire, see our Charter information and Submit a Request.